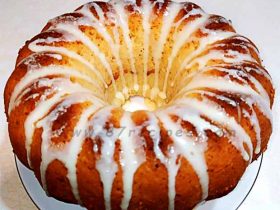 For the decoration : (cinnamon stars)

Start with the cinnamon stars and beat the egg whites until fluffy. Gradually stir in the sifted powdered sugar. Cut off 30 g and keep it for decoration. Now stir the cinnamon, vanilla sugar, and 100 g ground almonds into the rest. Knead together enough of the rest of the almonds until the dough is no longer sticky and can be rolled out.

Sprinkle some icing sugar on the work surface and roll out the dough to a thickness of 1 cm. Cut out the stars and place them on a baking sheet lined with parchment paper. Place a dollop of icing in the center of the stars and pull into the corners. Bake the cinnamon stars for 25 minutes.

For The Cake Base: Preheat
the oven to 170°C and line the bottom of a springform pan with baking paper. Place the springform ring on top, tighten and cut off the excess baking paper. Do not grease the baking pan.

Fill a large saucepan with some water and bring to a simmer. Hang a smaller saucepan or heatproof bowl over it. The little pot shouldn’t come into contact with water. Put the eggs, sugar, and a pinch of salt in the small saucepan and beat with a whisk for about 8 minutes until fluffy. The egg yolk should not get too hot, otherwise, the egg yolk will set.

Then put the mixture in a bowl and beat with a hand mixer at the highest level for 10 minutes until a thick cream is formed.

In a second bowl, mix the ground almonds, cornstarch, and cinnamon and fold them into the cream, spoonful by spoonful. A bit of tact is required to ensure that the mass does not lose its airy consistency, but that the dry ingredients are completely distributed.

Now the butter can be melted and also folded in with the whisk. Fill the finished dough into the springform pan and bake it in the oven for 35 – 40 minutes.

Allow the almond cake base to cool completely on a wire rack before dividing it. To divide, take a knife and lightly cut it all around. Take a strong thread and cut it in two.

Whip the cream with the cream stabilizer. Mix the sugar and cinnamon and pour into the cream. Continue beating until stiff.

Fold in the sour cream with a whisk.

Spread a little less than half of the sour cream on the cake base. Place the lid on top and spread the rest over the top and sides. 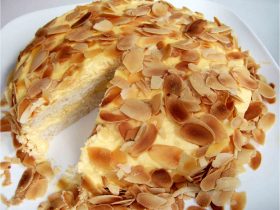 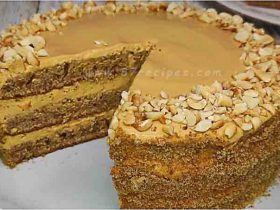 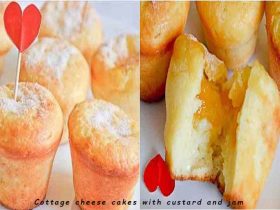 September 16, 2022
We use cookies on our website to give you the most relevant experience by remembering your preferences and repeat visits. By clicking “Accept All”, you consent to the use of ALL the cookies. However, you may visit "Cookie Settings" to provide a controlled consent.
Cookie SettingsAccept All
Manage consent

This website uses cookies to improve your experience while you navigate through the website. Out of these cookies, the cookies that are categorized as necessary are stored on your browser as they are essential for the working of basic functionalities of the website. We also use third-party cookies that help us analyze and understand how you use this website. These cookies will be stored in your browser only with your consent. You also have the option to opt-out of these cookies. But opting out of some of these cookies may have an effect on your browsing experience.
Necessary Always Enabled
Necessary cookies are absolutely essential for the website to function properly. This category only includes cookies that ensures basic functionalities and security features of the website. These cookies do not store any personal information.
Non-necessary
Any cookies that may not be particularly necessary for the website to function and is used specifically to collect user personal data via analytics, ads, other embedded contents are termed as non-necessary cookies. It is mandatory to procure user consent prior to running these cookies on your website.
SAVE & ACCEPT